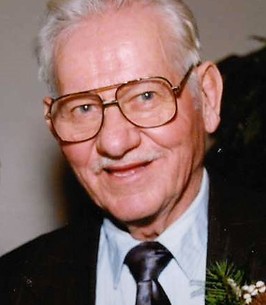 As a 16 year-old youth he was a member of the CCC camps, stationed in Alvin, WI, where his job was a truck driver. He proudly served his country in the Navy from 1942 to 1946 during World War II. He was most proud of his time on the aircraft carrier USS Midway as a Radioman Midshipman sending and receiving morse code. He was invited for a memorable visit of the ship in April, 2019 of which is a now a museum and docked at San Diego, CA. As a radioman, he frequently traveled with the Marines and spent time stationed on the island of New Caledonia. He was honored to travel on the Never Forgotten Honor Flight in 2012. He was also proud of his legacy stone at the High Ground Veterans Memorial Park and enjoyed visiting annually.

Living through the Depression years shaped how he lived his life – nothing was wasted. He farmed for most of his life in the Town of Emmet, and enjoyed lending a hand on his farm that his son took over. He lived for driving a tractor, and was happiest while doing field work – of which he could be seen planting crops on his 99th birthday. Out of necessity, he could fix just about anything. Often his workmanship was better and more durable than the original product.
In his retirement years, he spent many hours in his workshop. In addition to welding and maintaining farm equipment, he also welded and created home décor items, such as pumpkins, reindeer, and spider planters. His signature item of which countless family members have and treasure, and use every year, is a Christmas sled tree stand.

He was an avid Brewers fan. He often didn’t see the end of the game, especially when his team was losing, and the next morning he would be pleasantly surprised to learn they had come from behind to win.

Prior to his retirement, in addition to farming, he worked at Schuld Mfg. as a welder, and then at Mosinee Paper Mill for 18 years. During his lifetime, he had done many things. He was a ginseng farmer, fireman, butcher, meat cutter, welder, bus driver, Town of Emmet assessor, land surveyor for the ACSC program, and family barber.

He enjoyed the large family holiday gatherings where his children, grandchildren and great grandchildren were present. We were blessed to celebrate with him, his 100th birthday with a large gathering of family, neighbors and friends.

He is predeceased by his wife Lucille, and daughter-in-law Karen Stankowski, as well as brothers, Leo, Vincent, Ted, Alex, Sylvester, Severin and Ernest Stankowski, and sisters, Sally Woytasik and JoHanna Stankowski.

Funeral Services for Edwin will be held on Wednesday, June 15, 2022, at 11:00 A.M. at St. Patrick Catholic Church, Halder. The Rev. Joseph Nakwah and Rev. Monsignor Joseph Diermeier will concelebrate. Burial will be in St. Patrick Cemetery, Halder. Visitation will be held on Tuesday, June 14, 4:00 to 8:00 P.M. at Beste Funeral Home where there will be a 7:20 VFW Service followed by a 7:30 Rosary. Visitation will be again Wednesday, 10:00 A.M. until time of service at the church. Online condolences can be directed to the family at www.bestefh.com.

The family wishes to thank the staff at Rennes Health & Rehab and Aspirus Palliative Care and Hospice services for their compassionate and attentive care and support.

All rights reserved. This obituary is also archived at obittree.com